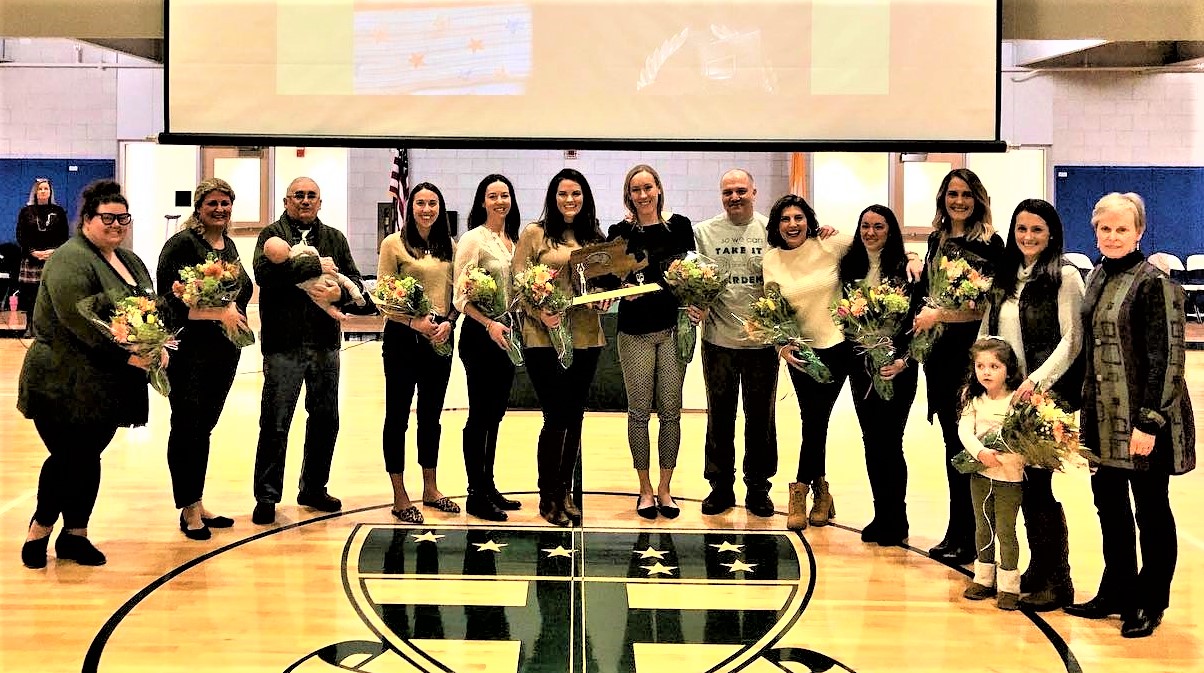 Ursuline Academy celebrated the 15th anniversary of its 2005 Division 4 Basketball State Championship on Tuesday, February 18, during the final varsity game of the current season. Ten members of the 2005 team, along with two coaches, gathered in the lobby of the Reynolds Family Athletic and Convocation Center on campus before the game, together for the first time since the team won the title back in 2005.

In a half-time ceremony, the champions were called out onto center court by name, and after remarks by Ursuline President Kate Levesque, were presented with bouquets and gifts to commemorate the evening. Fans in the bleachers were treated to a big-screen viewing of Mike Lynch’s WCVB “High 5” segment that aired after they won their championship, during a remarkable playoff run that capped a regular season record of 12 wins and 8 losses.

Although Ursuline’s Lowder Street campus has changed over the past decade and a half (its new athletic center opened in 2017), team members savored their memories and the spirit of their team, which hasn’t changed since that win at the then-called FleetCenter back on March 15, 2005. As icing on the cake of a perfect evening, Ursuline’s current varsity team won its game on Tuesday against Watertown, and is heading to this year’s state tournament as well.

The original team members are now accomplished young professionals, with a doctor, teacher, investment analyst, and two network reporters among them (Juli McDonald of Boston’s WBZ-TV, and Caitlin Burchill of Hartford, CT’s WVIT - NBC Connecticut). But for this one night, these young women were simply teammates again. After the ceremony, Burchill quipped, “It’s been 15 years since this team raised the school’s first state championship banner. And it felt like we were back on the bus together, but with babies in tow...so thankful there were no layup lines!”

Ursuline Academy features a competitive athletic program offering 14 different sports, with many at the JV and junior high levels. For the past two years, Ursuline athletics have been awarded the Boston Globe’s Singelais trophy for having the highest winning record of all schools in its division.