This year, Ursuline Academy is partnering with Xaverian Brothers High School to field a Mock Trial team. On Monday, February 7, students from the collaborative team triumphed in their second scrimmage against King Philip High School. King Philip holds a perfect 3-0 record in the official matches in their region, but the XU’s strong defense led to a decisive win. Xaverian Ursuline's win was due in no small part to stand out performances by witnesses, Luke Abruzese XB '24, Kyle Turner XB '23, and Georgia Kazis '25, who delivered compelling and nuanced testimony that evaded the most challenging questions KP could throw at them. Also of note were team captain Christian Bonadio XB '22, who expertly called the team's first hostile witness to the stand, and senior Dylan Carter XB '22, who cross-examined his witness with incisive confidence in his first-ever trial performance. Onyeka Nwazojie '25, Alora Guarino '25, Keira Mulligan '25, and Jillian Hoppie '25 also made their lawyerly debuts, and dominated with perfect and near perfect scores. A last honorable mention was Thomas Nee XB '25, who unexpectedly reprised his role as Officer Sophos Rawan to pinch-hit for KP, who was down a witness. 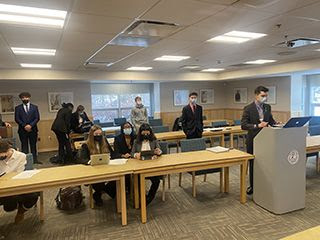